2009 Super Sentai will feature a really cool theme. What theme is that? Samurai! 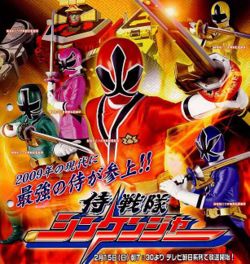 Super Sentai, meaning Super Squadron, is an ongoing yearly TV-series featuring a colored-costumed super hero team battling evil villians. Created in Japan, Super Sentai found its way to the USA and rest of the world when their English versions were made, in the form of Power Rangers!

The 2009 Super Sentai is Samurai-themed. Super Sentai can be cool and fun to watch but childish at times, but it has successfully found its way into the hearts of many super hero lovers.

In 2011, this becomes Power Rangers Samurai!