My new strategy game is still in production but is shaping up great. This is a picture of some of the stuff you can find in the game. More info... 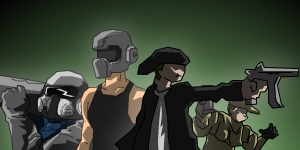 Well, I like strategy games a lot. I remember playing Warcraft 2, Red Alert, KKND, Tiberian Sun and other the likes when I was in school. Nowadays strategy games are more advanced and a lot different, but cool nonetheless. But they take up a hell lot of computer resources.

Since in high school, I have been planning to make my own strategy game and I designed all units, buildings and stuff on paper, just did not have the necessary platform to actually create a playable game out of the designs. 2 years ago I planned to make a strategy game using Macromedia Flash MX, but still with no luck. There is just too much to do and too many variables to handle.

But recently, I actually managed to pull it off. The production of the flash strategy game is running smoothly and on schedule, maybe a bit late though. No, I am not talking about some defense game where you need to shoot down incoming critters, nor am I talking about a path that leads to your base that gets invaded by alien vehicles and you need to gun them down buy building turrets along the way. And I am not talking about a game that requires you to play as world-president look-alikes, taking turns to setup your country to dominate the world. No! My game requires you to build a base and turrets and units. Not only do you need to defend your base by destroying invading units, but you also need to train units to invade the enemy base, destroy their turrets and destroy their headquarters! Oh yea!

The game production is still a long way to go, with much yet to be done, but everything is surprisingly quite smooth so far... Hoping for the best.

I Quit Must Dash