Gundam has gone a long way since the original gundam and Gundam SD. It has lots of seasons, versions and episodes, but Gundam Seed Destiny seems to have one of the best graphics and special effects! 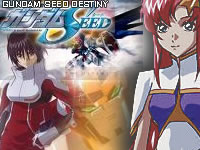 It is the Cosmic Era of 73. The Naturals and the Coordinators were on the verge of signing a peace treaty to end the war. But everything went wrong in this series of Gundam Seed Destiny, as Shinn Asuka and Athrun Zara of pilot their mobile suits to face a new threat of incoming forces. With a new wave of mobile suits, Gundam SD takes the viewer to a new level of space action!

I have no control over the original files. Tamugaia.com just airs them from other sites. A lot of episodes have become unavailable. Video hosting sites are actually prohibiting people to upload TV shows there, and some of uploaders' accounts got deleted, so Tamugaia.com that links to their Mobile Suit Gundam Seed Destiny videos will also display Video Not Available.

The later episodes should be viewable though, but view them before they disappear.

Although this is not my fault, I apologize for the inconvenience caused.

Cannot find an episode? Well, Youtube is probably the biggest video portal to date, but anime videos are being deleted and uploaded, so I cannot link to there, BUT! You can try to search Naruto Episodes, or any other anime episode, or any video from my portal that links to Youtube! If an episode exists there, it WILL be viewable here: Anime Videos at Video Tamugaia or SV Searcher

Saint Seiya Knights of the Zodiac