July 2008 is a memorable month for Tamugaia.com . The alexa ranking shot up. I am not sure why and I am still investigating, but hoping that this visitor rain will not stop... hehe.

Tamugaia Alexa Ranking shot up. Really, this is the screenshot: 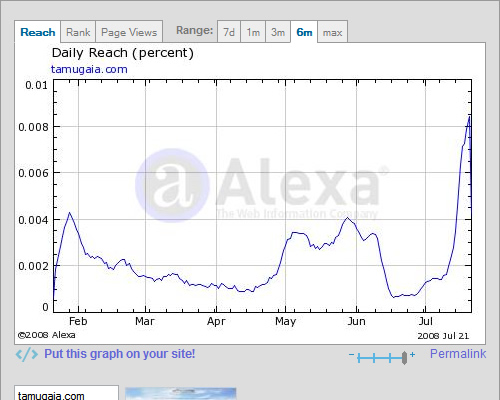 As you can see, in May, the ranking was quite high too, but in the middle and then it went down, as usual. Yes, usually my site is hit with just moderate traffic, somewhere below, where raking is around 100000 to 70000 and then it was up in may, to around 70000 to 30000 and then back down again. Mid July, it broke the record as you can see from the graph. The other day I checked, the daily ranking was 17000+. Cool.

Below is the video for Super Robot Wars Scramble Command 2nd for PS2. The game itself does not appeal to me and it was a bit of a bore, but frankly I am a bit fan of robots and stuff, especially the robots from Super Robot Wars. I grew up watching Grandizer, Getter Robo G, Danguard Ace, Mospeada, Macross (Robotech), Gundam... Enjoy!