Every morning, many people eat lots of stuff for breakfast. Noodles, spaghetti, bread, cookies, cakes, bread... But what do I eat for breakfast? Haha this...

This is what I eat for breakfast: 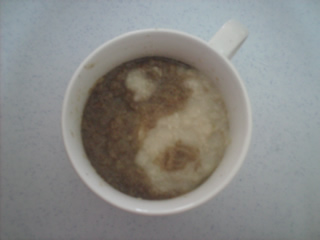 The I-Ching symbol. This is the symbol of Yin and Yang. You probably have seen this symbol in Chinese Movies, Martial Arts films, on a Bagua or on Rob Van Dam's wrestling singlet. This symbol is powerful and is used in feng shui. The dark part represents the Yin of Earth, which includes everything dark and gloomy like night, spirits, hell... And the white part represents Yang, which includes daytime, happiness, bla bla...

As for this breakfast cereal of mine, well the white part is made out of oatmeal porridge and the dark part is Weetabix cereal. Cool huh? According to my findings, we should not eat a lot for breakfast as opposed to the usual belief that we should eat like a king for breakfast which is the most important meal of the day. Our stomach digestion system goes full force only from 12 noon onwards and that is when we should eat a lot. In the morning, we can just eat a light meal for breakfast. But I can see lots of people nowadays eating tons of bread, cookies, butter, and meat for breakfast and that explains the ever-increasing number of "pregnant" men around.

Timelapse of the Future