Crappy Broadband for the Rest of the Month

Updating the site will be a bit slow, because of my ISP... Apparently, I exceeded the fair use limit and they have reduced my Internet speed to a pathetic amount. Other stuff is still great, though.

Some Broadband Internet Service Providers are good, but they still have this fair use policy thing that will reduce your Internet speed to a certain amount once your total data transfer for the month exceeds a certain amount, let's say 250GB or so. They say that they need to do this to solve network congestion problems. This is called Internet Speed Cap or Broadband Cap or something...

Well, my ISP seems to have a data transfer limit of 5GB only! Imagine that. I think I broke it this month and my Internet Broadband speed is now reduced to less than 56kbps. In fact, here is the speedtest result! 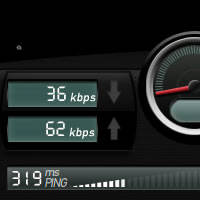 So it is rather frustrating when trying to update my site, and thus I will be adding new games probably next week when the broadband cap is removed from my account...

Other news: Remember the Armor Games Snowball Series? Well, Armor Games Snowball 2009 is coming up! I will also be working on the 2nd installment of Final Slam, which is Final Slam 2. The Strategy Game War and Beyond Deadly Strategies is almost ready for launch too. I will try to see if I can launch it by end of November or in December. War and Beyond Deadly Strategies is by far the flash game that prompted me to put in the most effort into. The development time spanned about 6-7 months, that is if I am able to launch it in December 2008.